After a long hiatus from blogging I have been inspired to pen report of occasional Skrimish Ragers games which I have been playing  recently. Skrimish Ragers in a zombie apocalypse game which the player(s) take on a group of survivors fro a Zombie Apocalypse and endeavour  to survive by completing missions and acquiring resources to further develop their characters.  Although  it is a tabletop game it does have roleplaying game elements. 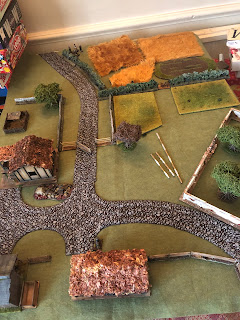 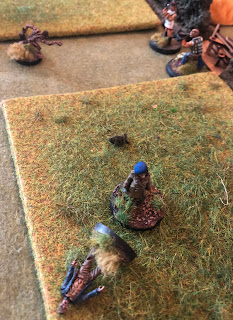 Approaching the farm through a cornfield  Beau stepped up with the aid of his crossbow dispatched two Zombies in the cornfield. By the time the group had reached boundary of the farm and crossed the sty they were attracting the attention of the Zombies milling around the farm yard.  Florence wanders in to the field and dispatched an approaching Zed with her Mag-lite. Beau missed a the second zombie twice then Michelle tried to shoot the zombie also missing, by this time it was on the group.
It was Nammie’s turn and she missed too,  swinging her club wildly,  but successfully dodged the  zombie’s free attack, getting out of the way. This left  Beau in the the path of the attacking Zombie. He was not so lucky, The Zombie bit Beau directly on the neck causing him to get infected and turn immediately in to a Rager. (This is not a good thing in these rules.) 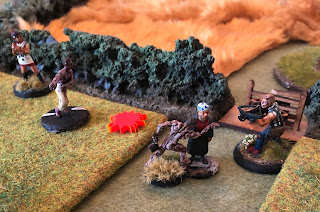 The group scattered Nammie being the closest was followed by the Rager, who was once Beau  and miraculously managed to wiggle free  from his grip and  as escape  to the shelter of a farm building.  this resulted in the Rager his turning his attention to  Florence   they fought  Struggling on the floor  with a supreme effort  after   being wounded with an non-infectious wound  she  dispatcher her former friend with an  massive blow to the head. but wounded now, unable to run  and in the centre of the farmyard  there was no guarantee  to she would be able to escape. 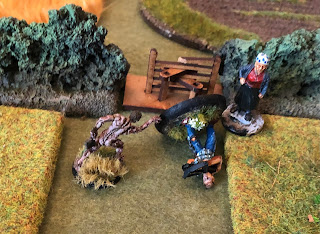 Searching the farm building Nammie found 50 Points of resources and a zombie, she managed to grab the resources  and move before the zombie. escaping the  building just ahead of them.

Now can they get off the board back in the direction the came? Michelle had shot a zombie and hopped over the fence on to the drive   two more  where approaching her,  she  raised  her revolver and fired stopping another and growing tof the rating zombie  on to her  allowing Nammie and Florence keep just a head of the  shambling zombies. Backing up Michelle fired again   an took out another zombie as  it lurched toward her. This shot again  drew  the other zombie toward her allowing Nammie to get out of the Farm with the all important resources.

Florence limped toward a zombie moving in her direction,  in an effort to get through the  gate.  Michelle took a bead on the Zombie , but “click…”  she was out our ammunition. Time to run!  Florence swings, connects, knocking the zombie off it’s feet…  She moves away, dragging her leg behind her at just over walking pace.

With Nammie and the supplies almost clear Michelle decided  discretion is the better part of valour and also beat a hasty retreat.

The Shooting and movement on the road to the farm had draw all the zombies on the table toward the road so still limping Florence had to throw herself over the picket fence and head back at a limp to the sty, where she had the presence of mind to pick up Beau’s crossbow and to made her escape. Through the cornfield with  every turn the zombies pursuing on her but only after two successful dodges she just got off the board before the horde caught up with her. 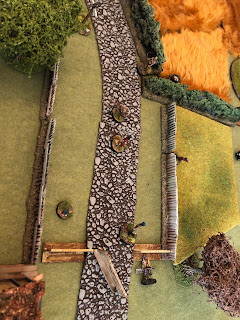 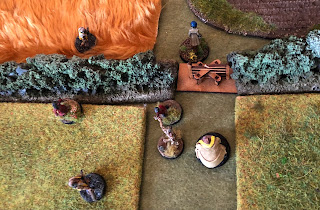 So the first solo game of Skirmish Ragers went very will. I have been very much enjoying our Skirmish Ragers campaign games at Central London prior to lockdown.  I though this would  a good opportunity  for some solo gaming. This is the first of a series of solo games I played of the past couple of years.
Posted by Jerry at 11:52