Last week I got it together enough to have another game of Chain of Command down at the Central London Wargames Club. This time Dave and I swapped sides and I took on the defending British Expeditionary Force while he commanded the might of the of the Wehrmacht in Scenario Four: A Delaying Action. 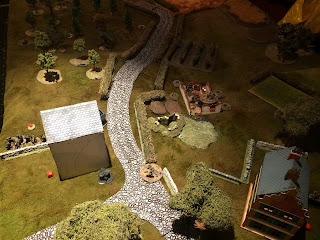 I was pretty sure my beginners luck was going to run out in this game. The deployment went well and I put the “victory condition” jump off point has far as way as possible. I was pleased with my deployment in the sense I created a couple of distinct killing zones in the areas I thought Dave would advance his Germans. 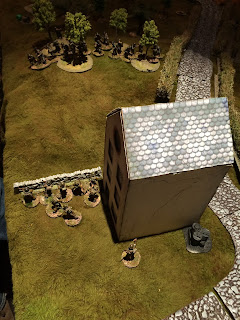 Has expected he the main point of his advance was on my left flank with two squads of infantry. My   Vickers was deployed on the second floor of the central building covering the German approach on the left. There was also an infantry section deployed behind, this moved up to engage them the advancing Germans. 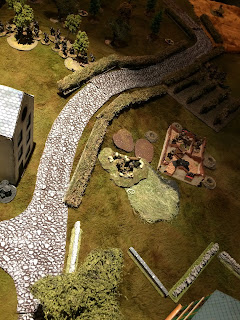 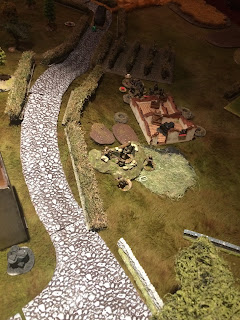 Thankfully I managed to pin back one of the advancing MG 34 teams with combined fire from the two units. Slowly pressure was brought to bear force the infantry section to withdraw behind the house and then actually into the house. 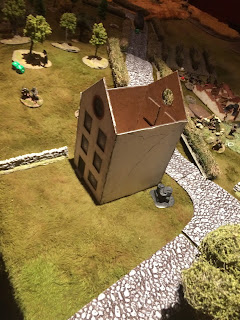 At this juncture I was helped somewhat by Dave's inability to role the command dice he needed to get other units on to the table. Despite this he continued to push forward on the flank and slightly over stretched himself, possibly tempted by a weakly defended 2 pounder. By advancing the remainder of his infantry past my position, once the phase changed I was forced to repositioned a Bren team and caught his overextended infantry in a cross fire from the Bren, a Vickers and a round of HE from the 2 Pounder for good measure. This resulted in the pinning of the unit.  With my next activation the British unit stormed out of the house and beat the c**p out of the pinned German unit resulting in their demise. 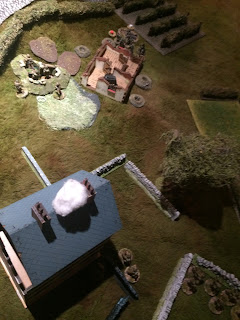 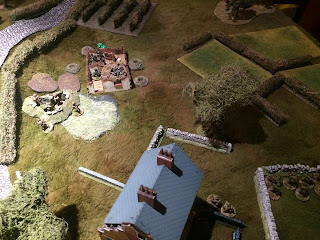 Next came a push in the centre to deal with. My centre was weakened by having to redeploy a Bren team which was subsequently destroyed by a counter strike from the second Wehrmacht squad on the left flank. Dave's infantry in the centre secured the hard cover of a ruined building I was a bit concerned. Thankfully my reserve unit successfully pinned them into their position but only after he routed my infantry squad in the centre. 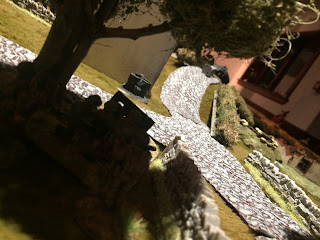 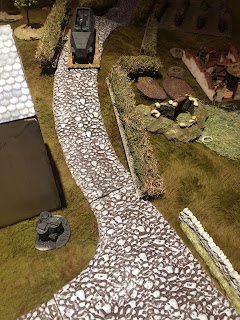 By this point my confidence was growing, yet I still had to face his mobile infantry filling a Sd.Kfz. 251 halftrack. Has it rolled over the crest of the hill. My 2 Pounder opened fire from under it's tree. “PING” a hit. This resulted in the halftrack being force off the road into cover, in the direction of travel. (We were not sure if we were interpreting the rules correctly here.) I still had one dice left so I opted to fire my mortar at the halftrack it scored a hit! We weren’t sure  if this would actually do damage to  it , but felt if the mortar landed in the back  of the halftrack  things might be a bit messy.  At that point we called the game since it was getting late and the Germans were delayed. It was a thoroughly enjoyable evening's gaming made even more so by the charming opponent and a victory.
Posted by Jerry at 11:51